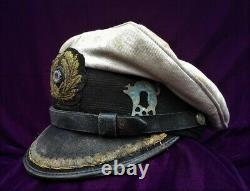 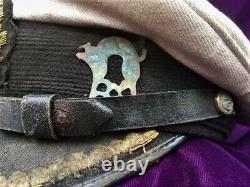 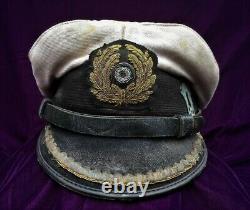 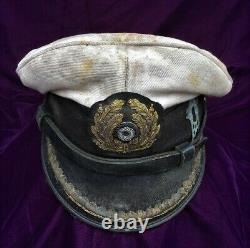 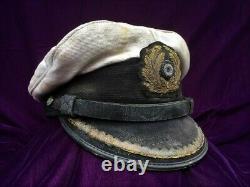 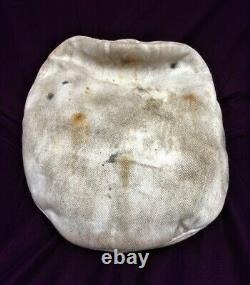 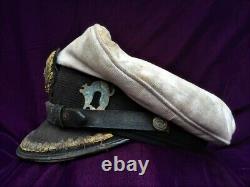 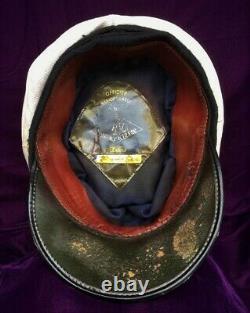 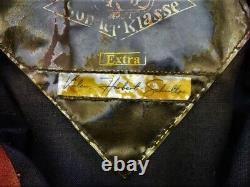 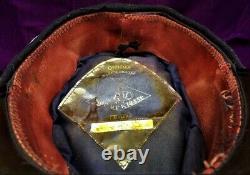 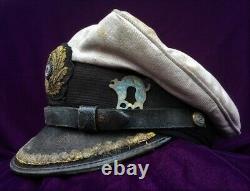 This is a museum quality reproduction of a very difficult to find (and very expensive) German U-Boat captains cap with 70+ years of ageing. It is a beautiful museum exhibit hat made from top quality material in aged condition. The body of the cap is made from heavy white gabardine cotton cloth that shows signs of rust and humidity staining from deep within the bowels of the'steel coffin'; an aged black wool cap band, old genuine leather chin strap, and a beautifully aged leather sweat band showing some major signs of repair. The insignia and visor are made from hand embroidered gold wire bullion with a very nicely aged patina. The leather sweatband has some stitched'in service repairs' and all repairs to the cap have been made using an extra strong German WW2 textile thread, which is about 3-4 times stronger than standard thread.

The cap bears the name of Kaleu. Being a commonly used abbreviation for Kapitänleutnant and comes fitted with an aged U-48 Cat x3 brass badge. These brass KM cap badges were not factory made during WW2 and this brass badge has been made by me in the same way as KM crew would have done so (or commissioned) back in the day i. With a very fine jewelers saw and bench pin.

The cap also comes complete with aged'birdy'. A perfect cap for your Kriegsmarine collection. This cap is not a cheap repro but has been made using German WW2 design patterns and aged to an'as used in combat' condition.

A genuine cap like this - if it ever came up for sale - will easily sell for thousands of pounds, which is beyond the price range of most collectors. I've examined many original and reproduction KM caps and this is as close as you will find to an original but at a fraction of the cost.

The cap you see in the pictures is the cap you will get. Please do not hesitate to ask questions and please do check out my other auctions of unique WW2 caps. Service history of U-48: the most successful commissioned U-boat of World War Two.

U-48, a Type VIIB U-boat, was built at the Germaniawerft, Kiel, between 1938 and 1939 under the designation of'Yard Number 583'. When war was declared in September 1939, U-48 was already in position in the North Atlantic - under the command of Kapitänleutnant Kptlt. During her two years of active service, U-48 sank 55 ships for a total of 321,000 tons; she also damaged two more for a total of 12,000 tons over twelve war patrols conducted during the opening stages of the Battle of the Atlantic.

Seven former members of the boat's crew earned the Knight's Cross of the Iron Cross during their military career: these were the commanders Herbert Schultze, Hans-Rudolf Rösing and Heinrich Bleichrodt, the first watch officer Reinhard Suhren, the second watch Otto Ites, the chief engineer Erich Zürn and the coxswain Horst Hofmann. U-48 survived most of the war and was scuttled by her own crew on 3 May 1945 off Neustadt in order to keep the submarine from falling into Allied hands. The cat x3 emblem originated with the U-48 but was used on other boats as officers from her moved on. Other U-boats that displayed this emblem were the U-564, U-998, U-1221 and the U-2518. The item "WWII WW2 Style German U-boat Kriegsmarine Hat Cap U-48 Herbert Schultze" is in sale since Tuesday, July 13, 2021.