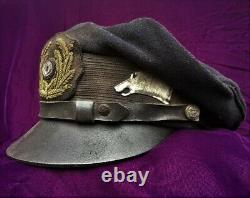 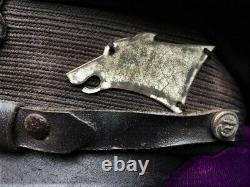 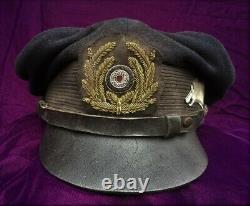 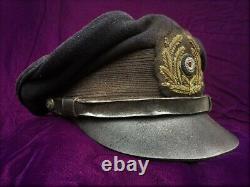 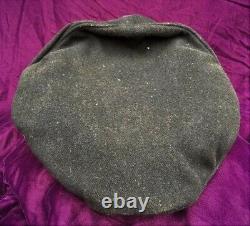 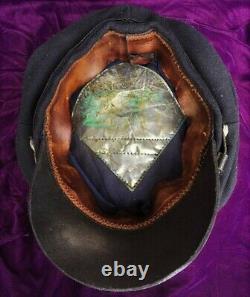 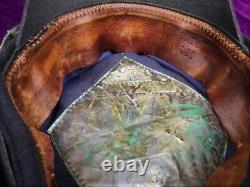 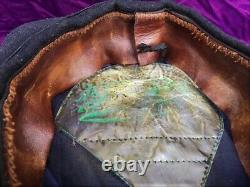 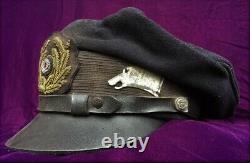 This is a stunning museum quality reproduction of a German U-Boat NCO cap, which has been handmade from original WW2 design specifications. The body of the cap is constructed from blue wool, a black wool cap band, genuine leather chin strap, and a beautifully aged lambskin leather sweat band. The leather visor has a sympathetically aged patina and t. He blue cotton lining cap has been sewn in to wartime specification.

The cap also comes fitted with a crew made brass cap badge of U-566 White Wolf. Established in 1877, n Schlöffel was one of the very finest manufacturers of Kriegsmarine caps, located close to the Kriegsmarinewerft Wilhelmshaven (Wilhelmshaven Naval Shipyard), Germany. The cap will come complete with its aged cloth Adler. I've examined many original and reproduction KM caps and the quality of this cap is as close as you will get to the real thing. The cap you see in the pictures is the cap you will get.

Please do not hesitate to ask questions and feel free to check out my other auctions and feedback. If you want a U-boat cap made for a specific U-boat commander please feel free to get in touch with me.

Thanks for looking and best wishes from the north Atlantic coast of Ireland. U-566 was a Type VIIC U-boat of Germany's Kriegsmarine. She was laid down on 30 March 1940 at the Blohm & Voss yard in Hamburg as yard number 542, launched on 20 February 1941 and commissioned on 17 April under the command of Kapitänleutnant Dietrich Borchert.

In the eleven combat patrols of her career the U-boat sank seven vessels; six merchant ships totalling 38,092 GRT between February and November 1942, and the 2,265 GRT patrol gunboat USS Plymouth (PG-57) on 5 August 1943. She was scuttled by her crew on 24 October 1943 after being damaged by six depth charges from a British Wellington aircraft in the North Atlantic west of Portugal. The item "WW2 Style German U-boat Kriegsmarine NCO Hat Cap U-566 White Wolf" is in sale since Monday, August 9, 2021.