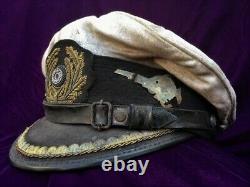 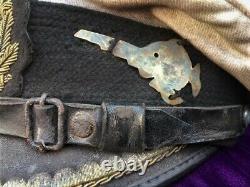 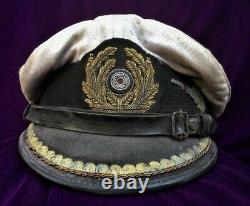 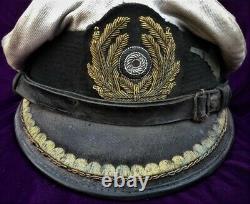 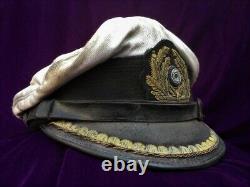 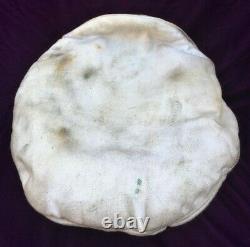 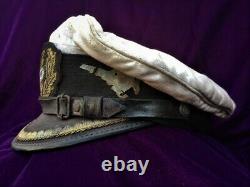 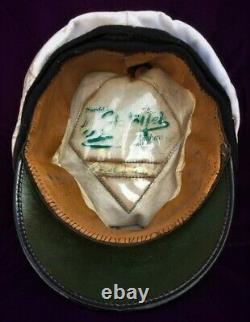 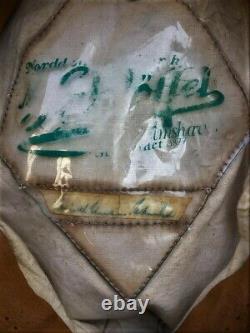 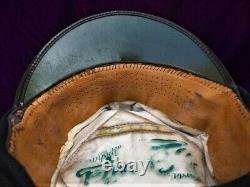 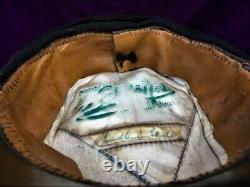 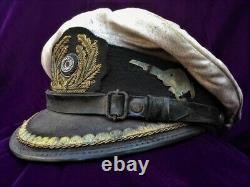 This is a museum quality reproduction of an impossible to find German U-Boat captains cap (U-96) with 70+ years of ageing. The cap has been made to represent a long war patrol piece and has been handmade using original WW2 design drawings. The body of the cap is made from white cotton that shows signs of rust and humidity staining from deep within the bowels of the steel coffin; a black wool cap band, genuine old leather chin strap, and a beautiful lambskin leather sweat band with signs of'in service' wear, tear and repair. The insignia and visor are made from hand embroidered gold wire bullion with an aged patina. Unlike cheap reproductions the gold bullion on this cap has been manufactured to the correct colour and extends the full length of visor on each side. Likewise, the cotton lining of the cap has been sewn into the cap as per the original wartime specifications. Being made to represent a long war patrol cap the visor of the cap has some'in service repairs'. All repairs to the cap having been made using German WW2 textile thread, which is 3-4 times stronger than standard thread.

Established in 1877, n Schlöffel was one of the very finest manufacturers of Kriegsmarine caps, being located close to the Kriegsmarinewerft Wilhelmshaven (Wilhelmshaven Naval Shipyard), Germany. Inserted inside cap label is an aged copy of Kapitänleutnant Heinrich Lehmann-Willenbrocks original signature. The cap also comes fitted with a U-96 brass cap badge of the boats sawfish emblem and its aged Adler a museum quality piece - copied from an original. A perfect cap for your Kriegsmarine collection. The cap you see in the pictures is the cap you will get.

Please do not hesitate to ask questions and feel free to check out my other auctions and feedback. If you want a U-boat cap made for a specific U-boat commander please feel free to get in touch with me. U-96 was a Type VIIC U-boat. She was laid down on 16 September 1939, by Germaniawerft, of Kiel as yard number 601, and commissioned on 14 September 1940, with Kapitänleutnant Heinrich Lehmann-Willenbrock in command. Lehmann-Willenbrock was relieved in March 1942 by Oberleutnant zur See Hans-Jürgen Hellriegel, who was relieved in turn in March 1943 by Oblt.

Horst Willner took command, turning the boat over to Oblt. Robert Rix in June of that year. Rix commanded the boat until February 1945. U-boat Flotilla, stationed in Saint Nazaire, on the French Atlantic coast, U-96 conducted 11 patrols, sinking 27 ships totaling 180,206 gross register tons (GRT) and damaging four others totaling 33,043 GRT. She also caused one vessel of 8,888 GRT to be declared a total loss.

The boat was a member of eleven wolfpacks. On 30 March 1945, U-96 was sunk by US aircraft while docked in the submarine pens at Wilhelmshaven. Throughout her entire career, she suffered no losses/ casualties to her crew. U-96 was also well known during the war because of her emblem, a laughing sawfish, which became the symbol of the 9th Flotilla after Lehmann-Willenbrock took command in March 1942.

During autumn 1941, war correspondent Lothar-Günther Buchheim joined U-96 for her seventh patrol. This experience was the basis for his 1973 bestselling novel'Das Boot', which was later adapted into the 1981 Oscar-nominated film of the same name -'Das Boot'. Thanks for looking and best wishes from the north Atlantic coast of Ireland. The item "WW2 Style German U-boat Kriegsmarine Hat Cap U-96 Das Boot Lehmann-Willenbrock" is in sale since Friday, August 27, 2021. This item is in the category "Collectables\Militaria\World War II (1939-1945)\Uniforms".