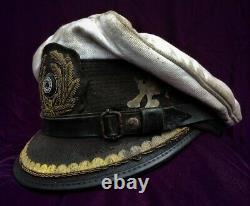 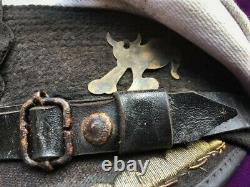 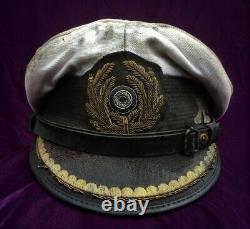 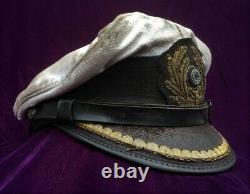 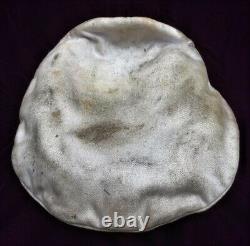 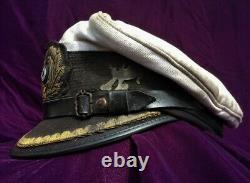 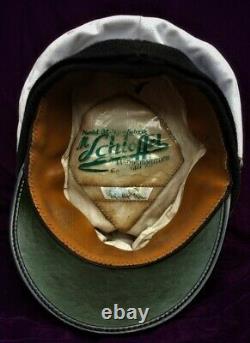 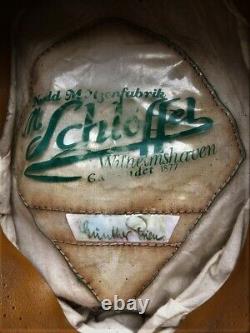 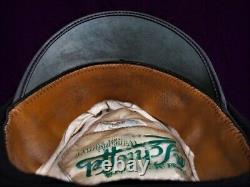 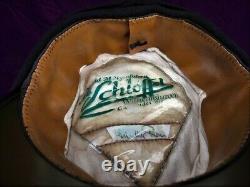 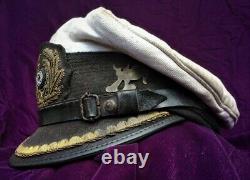 U-47 Kapitänleutnant Günther Prien: The Bull Of Scapa Flow (Der Stier von Scapa Flow). This is a stunning museum quality reproduction of a German U-Boat captains cap, which has been handmade using original WW2 design patterns. The body of the cap is constructed from white cotton that shows signs of rust and humidity staining; a black wool cap band, genuine leather chin strap, and a beautifully aged lambskin leather sweat band.

The insignia and visor are made from hand embroidered gold wire bullion with an aged patina. Unlike cheap reproductions the gold bullion on this cap has been manufactured to the correct colour and extends the full length of visor. Likewise, the cotton lining of the cap has been sewn into the cap as per the original wartime specification. The cap also comes fitted with a U-47 brass cap badge of the U-boats snorting bull emblem. Established in 1877, n Schlöffel was one of the finest manufacturers of Kriegsmarine caps, located close to the Kriegsmarinewerft Wilhelmshaven (Wilhelmshaven Naval Shipyard), Germany. Inserted inside the cap label is an aged copy of Kapitänleutnant. The cap will come complete with its aged Adler a museum quality piece copied from an original.

A perfect cap for your Kriegsmarine collection. I've examined many original and reproduction KM caps and this cap is as close as you will get to the real thing. The cap you see in the pictures is the cap you will get. Please do not hesitate to ask questions and feel free to check out my other auctions and feedback. If you want a U-boat cap made for a specific U-boat commander please also feel free to get in touch with me.

Thanks for looking and best wishes from the north Atlantic coast of Ireland. U-47 was a Type VIIB U-boat of the Kriegsmarine. She was laid down on 25 February 1937 at Friedrich Krupp Germaniawerft in Kiel as yard number 582 and went into service on 17 December 1938 under the command of. U-47 carried out ten combat patrols and spent a total of 238 days at sea. She sank 31 enemy ships (totalling 164,953 tons) and damaged eight more.

On the night of 13 October 1939, U-47, on its second war patrol under Priens command, penetrated the main Royal Navy base at Scapa Flow and sank the British battleship HMS Royal Oak. This legendary attack is remembered as one of the most audacious raids in the history of submarine warfare. The influence for his choice of the emblem came from a character in a comic paper that was popular among the crew before the Scapa Flow raid. The character, Harry Hotspur, was a bull with smoking nostrils which pawed the ground.

Endrass also felt that the insignia depicted the aggressive character and spirit of the boats commander, Günther Prien. Known as the The Bull Of Scapa Flow (Der Stier von Scapa Flow). The insignia would become arguably the most famous of all U-boat insignia. U-47 went missing after intercepting Convoy OB 293 on 7 March. At 05:19 Prien was caught on the surface and dived but could not escape the rapid depth charge attack from the escorts.

Prien has generally been thought to have been sunk by the British destroyer HMS Wolverine west of Ireland. U-47 was attacked by Wolverine and HMS Verity until U-47 rose almost to the surface before sinking and exploding with an orange flash visible from the surface. Other British reports of the action mention a large red glow appearing deep below the surface amid the depth charge explosions. To date, there is no official record of what happened to U-47 or her 45 crewmen, though a variety of possibilities exist, including mines, mechanical failure and falling victim to her own torpedoes. Posthumously, on 18 March 1941, Prien was promoted to Korvettenkapitän (corvette captain/lieutenant commander), effective as of 1 March 1941.