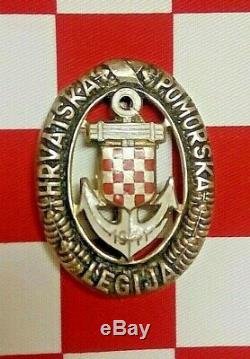 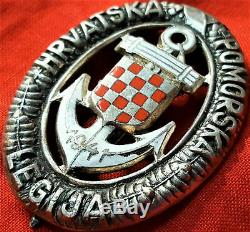 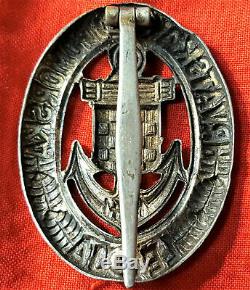 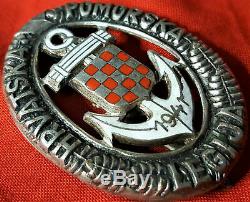 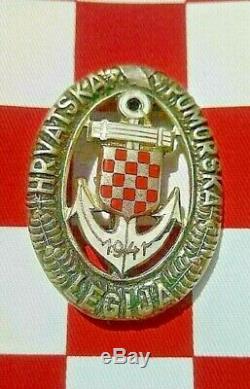 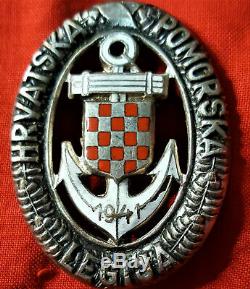 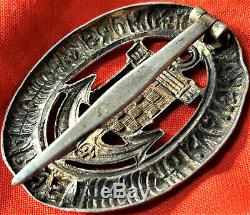 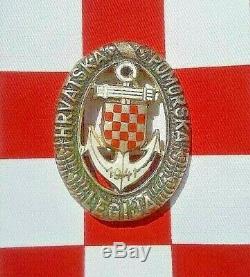 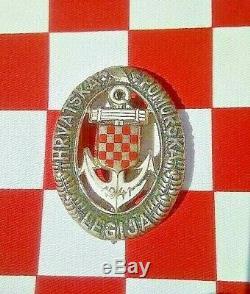 The oval oak leaf adorned outer band shows the wording'HRVATSKA POMORSKA LEGIJA' (Croatian Naval legion). The reverse is unmarked & retains the thick tapered pin, but lacking catch. This badge was awarded to members of the Croatian Naval Legion of the German KreigsMarine for two months service on the Eastern Front. The Hrvatska Pomorska Legija served under the Kreigsmarine in the Black Sea.

They fought in KM uniform with an arm-shield, in several patterns, in Croatian national colours. They crewed a flotilla of minesweepers operating in Crimea and the Sea of Azov in 1941-43, and later a submarine-chaser flotilla 23. U-Bootsjagdflottille in the Black Sea during 1943-44. In 1943, a Coastal Artillery Battery was added. Almost 1000 men served with the Legion under Commander Andro Vrkljan and Captain Stjepan Rumenovic. They were allowed to wear the badge on their new uniforms.

In December 1944 an attempted munity was put down by the Germans as some of the crews tried to defect to the Allies. They surrendered to the Partisans at the end of the war. This is very Rare badge and is genuinely very attractive item to acquire either for the Rare example sake, to be reunited with the the families of the Hrvatska Pomorska Legija or for the research and history study of NDH and Croatian early Navy development. Please feel free to make any reasonable offer.

The item "WW2 CROATIAN NAVAL LEGION QUALIFICATION BADGE MEDAL NDH-GERMAN KRIEGSMARINE" is in sale since Wednesday, September 9, 2020. This item is in the category "Collectables\Militaria\1939 - 1945 (WWII)".

The seller is "cive2015" and is located in Longreach, QLD. This item can be shipped worldwide.