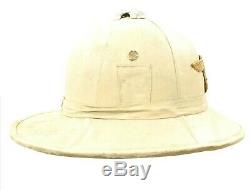 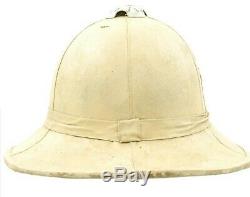 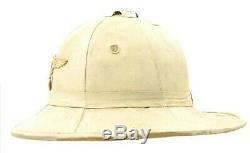 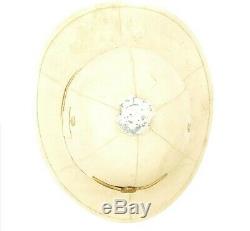 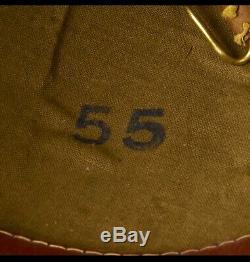 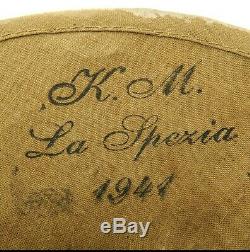 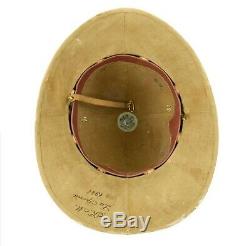 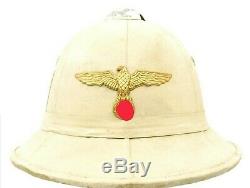 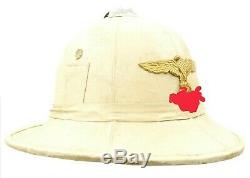 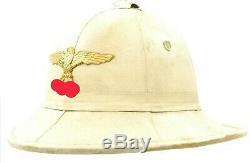 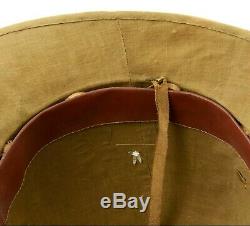 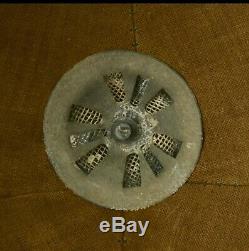 This particular example shows signs of strong use, but is complete and in tact, with all of the expected parts accessories, including the original large, gold die stamped alloy construction national eagle. The eagle is in superb condition, and is firmly attached with three prongs that are clearly visible on the interior of the helmet (as expected). One still hotly disputed debate surrounds what was the first sun helmet utilized by the Third Reich. It is true that the Kriegsmarine used a pressed fiber styled helmet that was a holdover from the days of Weimar Republic's navy but by the outbreak of the Second World War the German military wasn't exactly planning for combat in tropical regions.

Much of this changed with the fall of France in June 1940 and the opening of a campaign in North Africa later that year, followed by the invasion of the Balkans in the late spring of 1941. In other words the German military planners likely didn't have a plan when it came to tropical uniforms or equipment.

It is therefore possible that the first pattern of sun helmet used in the Mediterranean theater were of Italian origin! While it is known that Germany utilized captured French sun helmets - as well as those from the Netherlands intended for South Africa and even British helmets - the use of Italian helmets has been a bit more of a mystery. Would the Germans utilize Italian helmets - specifically the Model 1928 pattern - when they were producing their own? The answer could be that the Italian helmets were among the first helmets to be used by German forces. With the fall of France Germany suddenly was able to use this newly captured territory for its U-Boat bases. There is little doubt that French equipment was pressed into service it could be that the Italian equipment was also utilized to fill the needs for those naval personnel stationed at those bases. The Italian used helmets are notable in that these include German military stamps including those denoting use at Cherbourg, which could indicate that these were used in the warm summer months at the newly installed German bases! Moreover, as Niewiarowicz noted these helmets feature a common variant Kriegsmarine insignia (which may be termed as'theater-made') and found applied to the Italian pith helmet. Note that the national color has a non-pebbled surface.

That latter fact is that these shields are different from those found on the German patterns used during the African Campaign. A theory to present is that these were not "theater-made" but rather the very first pattern, which is why this variation almost always appears only on Italian helmets.

This is because the badges were produced specifically for the Italian-supplied helmets and modified accordingly when the next batch of helmet shields were produced. This would be in keeping with the notion that the German Navy would operate in the Mediterranean Sea to fend off a British invasion. Thus this could be considered a "Kriegsmarine" pattern helmet shield as well. Of course Italian helmets may have been pressed into use with the German Afrika Korps as well as noted in a period photo above, which most certainly does show a German soldier with an example. All this suggests that despite the many seemingly unissued German sun helmets from World War II at one point there were certainly shortages of headgear and the Germans had to make due.

This item is in the category "Collectibles\Militaria\WW II (1939-45)\Original Period Items\Germany\Uniforms". The seller is "wirelessguy1969" and is located in Oklahoma City, Oklahoma. This item can be shipped to United States.