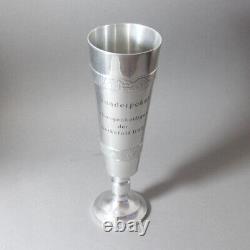 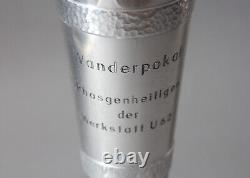 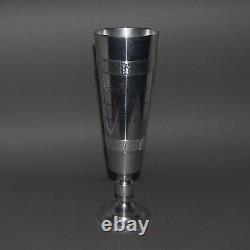 Up for sale is ultra-rare, mysterious German submarine trophy that I bought from a friend in Wilhemshaven many year ago. This cup is hand-worked from a massive piece of stell or an aluminium alloy.

It is 12 inches tall and difficult to photograph because it was polished to a high level of mirror gloss. The weight is 836 grams. The trophy was made on a precision turning lathe and later partially hammered and engraved. The inscription says: "Wanderpokal Phosgenheiligen der Werkstatt U62". Translated this means: "Challenge cup phosgene saints of the repair shop U62".

I believe this was used for a challenge in the repair shop or in the shipyard, but some experts told me it was probably made on board in a privatre, unofficial context. This is a unique once a lifetime opportunity for collectors. Phosgene is the trivial name for carbon oxide dichloride or carbonyl chloride, COCl2, the dichloride of carbonic acid.

Compounds of the composition C2O2Cl4 or C3O3Cl6 are called diphosgene or triphosgene, respectively, which are used as synthesis equivalents of phosgene but are not oligomers of it in the strict sense. The substance, which is extremely toxic as a gas, is used in industry only in hermetically sealed circuits. In some wars it was used as a lethal chemical warfare agent.

However, it has long been outlawed by the international Chemical Weapons Convention. Background: U 62 was a Type II C submarine used by the German Navy during World War II. The contract to build the submarine was awarded to Deutsche Werke in Kiel on July 21, 1937. Keel laying took place on January 2, 1939, launching on November 16, 1939, and commissioning under Oberleutnant zur See Hans-Bernhard Michalowski on December 21, 1939. From its commissioning until 31 December 1939, the boat belonged to the U-flotilla "Emsmann" in Kiel as a training boat.

When the U-flotillas were reorganized, it joined the 1st U-flotilla in Kiel on 1 January 1940 as a training or front-line boat. It was then used as a training boat in the 21st U-flotilla at Pillau from 1 October 1940 to 3 May 1945. It was finally self-sunk at Wilhelmshaven on May 5, 1945.

The steamer was sunk by a torpedo. It was carrying 7,860 tons of iron ore and was en route from Pepel, Sierra Leone via Freetown to Methil and Immingham. There were 13 fatalities and 26 survivors. The boat was decommissioned at Wilhelmshaven on March 20, 1945, and was laid up there on May 5, 1945, in the west chamber of IV. Einfahrt (Raederschleuse) in accordance with the long-standing Regenbogen order, which was rescinded by Grand Admiral Dönitz on the evening of May 4, 1945. The wreck was lifted and scrapped after the end of the war. I use refurbished and recycled packaging material to save natural resources. Please understand that connoisseurial attributions ultimately remain highly subjective.

This item is in the category "Collectibles\Militaria\WW II (1939-45)\Original Period Items\Germany\Other German WWII Orig. The seller is "sonnenhymnus" and is located in this country: DE. This item can be shipped worldwide.