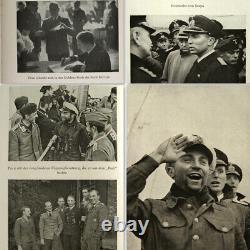 A rare documentary book after recordings of the author on board and the official war diaries of the lieutenant commander Günther Prien available with the commander of the submarines. The ad from the publisher said about this book. This book developed on board of the u-boat led by lieutenant commander Günther Prien during the last enterprise, which the unforgotten one lucky terminated. It supplemental by descriptions after the official war diaries Priens and widens in such a way to a comprehensive picture of all war travels of the young hero of Scapa flow.

The majority of the pictures is selected under the only, during an enterprise Priens developed photographs, which have survived to us as alive documents. Good exterior and near fine interior. Boards and spine slightly rubbed, else ok.

Hartmann patrolling in Spanish waters during the Civil War. With his own boat U47 he became famous for his 14 October, 1939 sinking of the British battleship HMS Royal Oak in the heavily defended British North Fleet main harbor at Scapa Flow. Churchill himself wrote about this outstanding feat of arms of a German U-boat commander. Prien was the first U-boat commander to win the Knights Cross. Prien's Decorations: 25 Sep, 1939 Iron Cross 2nd Class 17 Oct, 1939 Iron Cross 1st Class 18 Oct, 1939 Knights Cross 20 Oct, 1940 Knights Cross with Oak Leaves.

This item is in the category "Collectibles\Militaria\WW II (1939-45)\Original Period Items\Germany\Books". The seller is "nade5559" and is located in this country: DE. This item can be shipped to North, South, or Latin America, all countries in continental Asia, United Kingdom, Australia.