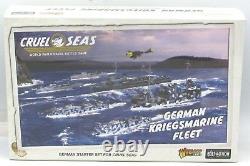 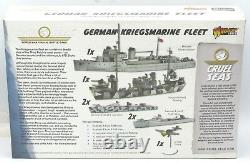 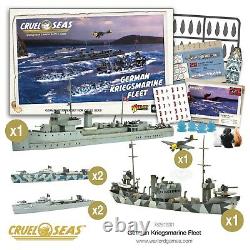 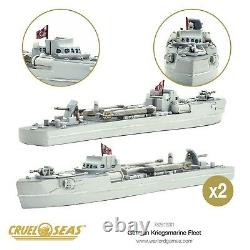 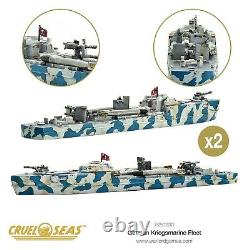 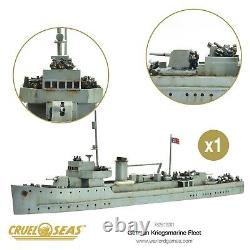 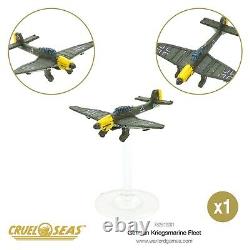 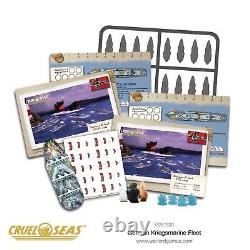 Cruel Seas - German Kriegsmarine Fleet. Summary: Unpainted starter set for Cruel Seas. Cruel Seas is a fast-paced 1/300 scale tabletop game recreating the swirling naval dogfights that took place on the seas around the world in the dark days of the Second World War.

Kaiser Wilhelm's vision, indeed obsession, with building a vast fleet of dreadnoughts came to nought during the Great War. He knew that his excellent fleet could not risk significant battles with the Royal Navy, it was a one-shot weapon. The lighter units, particularly the U Boats, did most of the real work on a weekly basis. The German Navy was only raised in 1871, with a brief to concentrate on the North Sea and Baltic Coasts.

Perhaps because of its youth, the Kriegsmarine was quick to appreciate the power of the humble torpedo that could cripple or kill a vessel worth millions of marks. They were thus also keen to develop the promise of the torpedo boat, cheap, potentially deadly and of great use in restricted waters. The German Kriegsmarine Fleet Contains.

1 x M-class minesweeper (resin and metal). 1 x Ju-87D Stuka (metal). Note: All Cruel Seas items manufactured by Warlord Games are 1/300th (6mm) scale. Multi-part plastic, resin and metal miniatures. Miniatures are supplied unpainted and require assembly. Material: Plastic, Resin, Metal and other materials. This is a hobby product and not a toy. Recommended for ages 15 and up. This item is in the category "Toys & Hobbies\Games\Miniatures, War Games\Other Miniatures & War Games". The seller is "dzur2003" and is located in this country: US. This item can be shipped to United States.