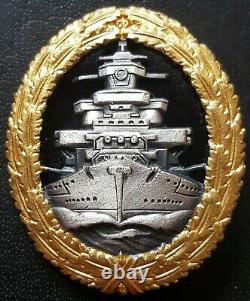 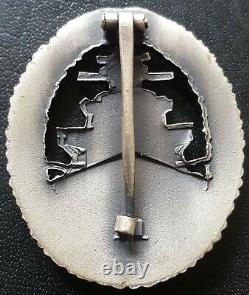 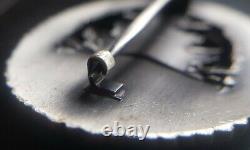 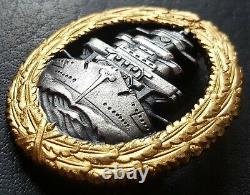 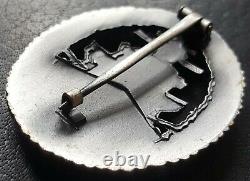 Original German Navy Kriegsmarine High Seas Fleet War Badge post WW2 / 1957pattern, VERY NICE CONDITION - PERFECT PIN DEVICE WITH OPEN HINGEBLOCK (LATE PERIOD - ST&L / STEINHAUER UND LUECK MADE). In 1957 the West German government authorised replacement Iron Crosses with an Oak Leaf Cluster in place of the swastika, similar to the Iron Crosses of 1813, 1870, and 1914, which could be worn by World War II Iron Cross recipients. The 1957 law also authorised de-Nazified versions of most other World War IIera decorations (except those specifically associated with Nazi Party organizations, such as SS Long Service medals, or with the expansion of the German Reich, such as the medals for the annexation of Austria, the Sudetenland, and the Memel region). The main government contract to manufacture and supply these new de-nazified WW2 1957 official decorations went to the world famous German firm Steinhauer & Lueck, Luedenscheid Germany.

A property was bought at 51 Hochstrasse which is still home for this famous company today. During WW2 Steinhauer & Lück produced medals and badges, like the famous Knights Cross and many other types of medals and badges. In 1957 this company was awarded the contract to produce all the newly re-designed legal WW2 1957 de-nazified decorations, plus the contract to manufacture all of Germany's official decorations including Germany's highest order the Bundesverdienstkreuz. Only a very limited number of original WW2 1957 medals are still produced, mainly Iron Crosses, German Cross Gold & Silver & Wound Badges and are considered 100% genuine by the German Government. Kriegsmarine High Seas Fleet War Badge - At the direction of Grand Admiral Erich Raeder, commander in chief of the navy, the Fleet War badge was instituted on April 30 1941 to recognize the sea actions of the German Navy, mainly in actions against England.

The designer as well as the principal maker was, Adolf Bock of Berlin. Even though the badge was instituted in 1941, it was awarded for actions prior to that date. The High Seas Fleet War Badge is highly detailed and easily recognized by its silver German battleship coming head on at full steam plowing through the center of the Badge.

The battleship is surrounded by a gold wreath that has, at its base, a ribbon tied in the form of an X with an acorn in the top and lower V formed by the tie. There are 8 bunches of two oak leaves that make up the wreath, with a single acorn at the tip of each leaf alternating on the outside and inside. At the top of the Badge is the national emblem with wings spread, clutching a swastika in its claws. One will note the high detail in the battleships guns, windows, and waves created as it passes through the water.

From the base to the tip of the eagles head measures 57mm and the width is 44mm. The eagles wingspan is 31mm and width of the wreath is 7mm. The back of the badge is flat with a dished shape and black in appearance. The hinge, pin and hook assemblies are also black.

Some known makers of this badge are Adolf Bock, Schwerin and Friedrich Orth. The badge was presented in a case or gray envelope with the name of the award stenciled on the front. The case was dark blue with an unmarked exterior. The interior was lined with a bright flocking on the top and bottom of the case.

It was presented with a standard award document. The High Seas Fleet Badge was worn on the lower left breast pocket below the Iron Cross 1st Class, if that award was owned by the recipient. The Fleet War Badge was awarded to crews of battleships, cruisers and other naval ships serving in combat areas, including those killed in action. For personnel serving on battleships or cruisers, the award came through the commander of the task force.

For other naval personnel the award came through naval headquarters. The criteria for receiving the award is as follows: 12 weeks service on a battleship or cruiser, with proof of distinction and good conduct. The number of weeks could be reduced if the following conditions were met; if the recipient wounded or killed during the voyage, if the cruise was successful, for participation in Rawalpindi and Jan Mayen. The item "8262 German Navy Kriegsmarine High Seas Fleet War Badge post WW2 1957 pattern" is in sale since Wednesday, April 24, 2019. This item is in the category "Collectables\Militaria\World War II (1939-1945)\Medals/ Ribbons".

anderson" and is located in Abbots Langley. This item can be shipped worldwide.