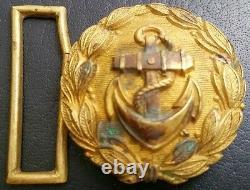 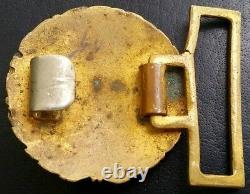 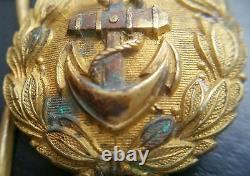 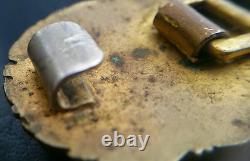 Original German WW2 Navy Kriegsmarine officer parade belt buckle - NICE WORN CONDITION, DIAMETER: cca 39 mm. KRIEGSMARINE LINE OFFICER'S BELT BUCKLE (Schaerpenschnalle) - Military belts and their corresponding buckles date back centuries and were initially designed for attaching swords and daggers. In 1847 a new innovative box buckle with a quick release catch and corresponding belt were introduced which resulted in a Prussian, Hauptmann Virschow, initiating a new method of carrying personal equipment with the belt and shoulder straps supporting the majority of the weight. This system, with modifications, remains in use in most of the armies in the world to this day. During the Third Reich there was a prescribed form of wear of the belt and buckle with the buckle being positioned on the right side and the corresponding buckle catch on the left side.

Originally the buckles were only produced with a gilt finish until 1934 when a silver version for Administrative Officials with the equivalent of Officers ranks was introduced. The Officer's/Administrative Officials' belt buckle came in two sizes with a roughly, 57mm, (2 1/4"), diameter buckle for wear with the brocade dress belt and a smaller, roughly, 38mm, (1 1/2"), diameter buckle for wear with the black fabric undress belt. The belt comes with a roughly, 57mm diameter, injection molded, gilt washed, aluminum alloy construction buckle which features a high relief, embossed, overlapping, laurel leaf wreath outer edge encompassing an embossed, vertical, fouled anchor, on a slightly domed, horizontally ribbed field. The outer edge of the buckle conforms to the shape of the laurel leaves.

This item is in the category "Collectables\Militaria\World War I (1914-1918)\Uniforms".anderson" and is located in this country: GB. This item can be shipped worldwide.