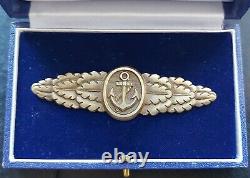 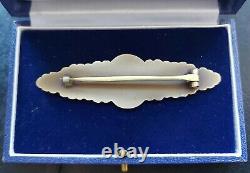 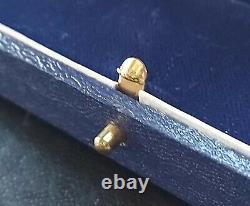 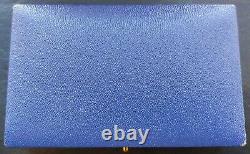 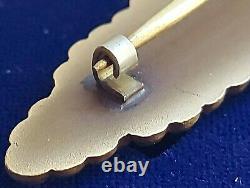 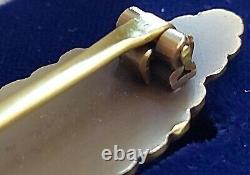 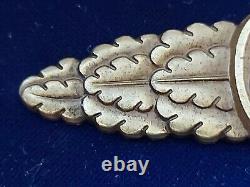 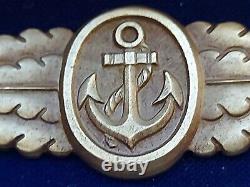 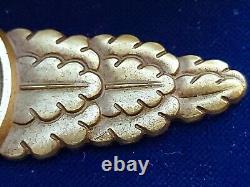 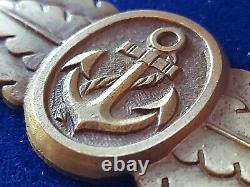 Original German post WW2 / 1957 pattern Navy Kriegsmarine Naval Combat Clasp, IN VERY NICE CONDITION - PERFECT PIN DEVICE, MAKER: ST&L (STEINHAUER UND LUECK) - GOOD LATER EXAMPLE (OPEN HINGEBLOCK) IN A MOST LIKELY MODERN AWARD CASE, THE AWARD IS NOT OFTEN SEEN. FEW FACTS ABOUT THE 1957 PATTERN AWARDS. In 1957 the West German government authorised replacement Iron Crosses with an Oak Leaf Cluster in place of the swastika, similar to the Iron Crosses of 1813, 1870, and 1914, which could be worn by World War II Iron Cross recipients. The 1957 law also authorised de-Nazified versions of most other World War II-era decorations (except those specifically associated with Nazi Party organizations, such as SS Long Service medals, or with the expansion of the German Reich, such as the medals for the annexation of Austria, the Sudetenland, and the Memel region). The main government contract to manufacture and supply these new de-nazified WW2 1957 official decorations went to the world famous German firm Steinhauer & Lueck, Luedenscheid Germany. Knights Crosses, Iron Crosses, Wound Badges, Tank Assault Badges etc were re-designed by Steinhauer & Lück - often with the oak-leaf spray replacing the swastika, with S&L having the sole patent rights to all WW2 1957 German decorations. S&L did not have the whole monopoly on medal making, other famous firms such as Deschler & Sohn, BH Maher and Juncker also manufactured these new German decorations.

Lüdenscheid is situated between the cities Dortmund and Bonn. It was here that one of the youngest medal firms was founded in 1889 by August Steinhauer and Gustav Adolf Lück. The first production began in a cellar, the customer base continued to increase. A property was bought at 51 Hochstrasse which is still home for this famous company today.

During WW2 Steinhauer & Lück produced medals and badges, like the famous Knights Cross and many other types of medals and badges. In 1957 this company was awarded the contract to produce all the newly re-designed legal WW2 1957 de-nazified decorations, plus the contract to manufacture all of Germany's official decorations including Germany's highest order the Bundesverdienstkreuz.

Only a very limited number of original WW2 1957 medals are still produced, mainly Iron Crosses, German Cross Gold & Silver & Wound Badges and are considered 100% genuine by the German Government. Naval Combat Clasp (German: Marine-Frontspange) was a World War II German military decoration awarded to officers and men of the Kriegsmarine in recognition of long, hard front line service for all naval units. On November 19th, 1944, Admiral Dönitz instituted the Marine Combat Clasp to be presented to Navy personnel for meritorious actions which were not covered by existing decorations. It was necessary to perform actions five times in excess of the requirements for a basic war badge.

The badge was intended to be worn above the left pocket. Because this badge was created so late in the war, it is rare in the extreme. A 1957 version was also instituted. This item is in the category "Collectables\Militaria\World War II (1939-1945)\Medals/ Ribbons".anderson" and is located in this country: GB.