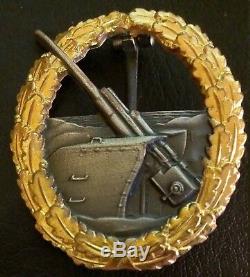 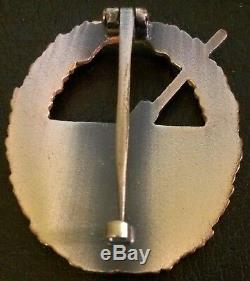 Original German Navy Kriegsmarine Coastal Artillery Badge - post WW2 (1957 pattern), NICE CONDITION - PERFECT PIN DEVICE, ST&L (Steinhauer und Lueck) made later example (open hinge block). In 1957 the West German government authorised replacement Iron Crosses with an Oak Leaf Cluster in place of the swastika, similar to the Iron Crosses of 1813, 1870, and 1914, which could be worn by World War II Iron Cross recipients. The 1957 law also authorised de-Nazified versions of most other World War IIera decorations (except those specifically associated with Nazi Party organizations, such as SS Long Service medals, or with the expansion of the German Reich, such as the medals for the annexation of Austria, the Sudetenland, and the Memel region). The main government contract to manufacture and supply these new de-nazified WW2 1957 official decorations went to the world famous German firm Steinhauer & Lueck, Luedenscheid Germany.

A property was bought at 51 Hochstrasse which is still home for this famous company today. During WW2 Steinhauer & Lück produced medals and badges, like the famous Knights Cross and many other types of medals and badges. In 1957 this company was awarded the contract to produce all the newly re-designed legal WW2 1957 de-nazified decorations, plus the contract to manufacture all of Germany's official decorations including Germany's highest order the Bundesverdienstkreuz. Only a very limited number of original WW2 1957 medals are still produced, mainly Iron Crosses, German Cross Gold & Silver & Wound Badges and are considered 100% genuine by the German Government. The Coastal Artillery Badge - The coastal artillery service was the Kriegsmarine branch responsible for protecting the Reichs coastal borders from both air and sea attack. On June 24, 1941 Grand Admiral Raeder instituted the War Badge of the Coastal Artillery to reward the actions of both individuals and crew members. Designed by Otto Placzek of Berlin, the badge consists of two rows of oak leaves in the form of a wreath.

Inside the wreath is a coastal artillery piece with the ocean in the background. Centered at the top of the badge is an eagle with downward facing wings at its side clutching a swastika.

Original examples have 15 full oak leaves per side with two partial leaves at the top near the national emblem. The wreath and national emblem are finished in gold while the remaining areas have a gray finish. As the war progressed and material quality declined the finish wore off more quickly, giving a gray overall appearance to many examples. The badge was presented in a titled envelope and was worn on in the middle of the top most tunic pocket. Upon receipt of the badge each recipient received an award document and notation was made in their Soldbuch/Wehrpass.

Gun crews which downed an aircraft unassisted were given two points. If assistance from another crew was necessary only one point was awarded. Searchlight crews, fire-control personnel, sound-locater crews, and radio operators were also entitled to the award but only received half a point for each first detection. It could also be awarded posthumously for death in action or accident on duty.

The award was initially intended for members of the coastal air defense force, but not long after its institution it was expanded to include crew members of guns positioned against naval targets. The item "5123 German Kriegsmarine Coastal Artillery War Badge post WW2 1957 pattern" is in sale since Sunday, April 8, 2018. This item is in the category "Collectables\Militaria\World War II (1939-1945)\Medals/ Ribbons".anderson" and is located in Abbots Langley. This item can be shipped worldwide.